From Wildsong
Jump to navigation Jump to search

How does snow pack in Yellowstone affect the migration of elk? Dr. Fred Watson at the Watershed Institute in Monterey, California has developed a computer model of Yellowstone backcountry. To make his model more accurate, he needs data on wind and snowpack depth to see what effect the localized wind patterns have on snow loss in the spring.

So, Fred figured that about 200 logging anemometers would do the trick. To get that many, they would have to be cheap! But they'd have to withstand high winds and temperatures as low as -40C.

No available commercial product met these specs, so we built them. (Actually we've done the first run of 36 as of Spring 2003.) There were deployed in March 2003 and THEY WORKED. Fred has received additional NASA funding to build the remaining units for deployment in Spring 2004.

Dr. Fred was assisted by Jon Detka, who designed and built the housings and the moving parts and Thor Anderson who handled project coordination and Tad Masek and myself from the ESSP 330 "Electronics Projects" class. Immense thanks to Dr. Steve Moore for teaching ESSP 330 and making this project available to me.

My part was helping with the hardware design, and I spec'ed and ordered the components, did the PC board layout and wrote iPAQ PDA software to collect the data in the field from the data loggers. I also worked on the PIC assembly code.

You can peruse the code, schematics and circuit board layouts. Hardware is under 'eagle' and software in 'yelstn2'. ("Sled" was for an underwater video camera sled that we did not finish)

Here are is a picture of the first batch of boards being assembled. Click on image for bigger picture 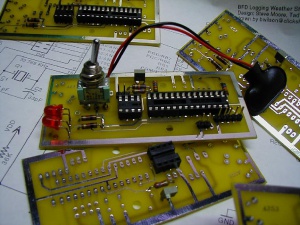 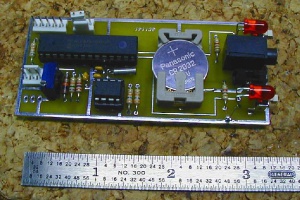